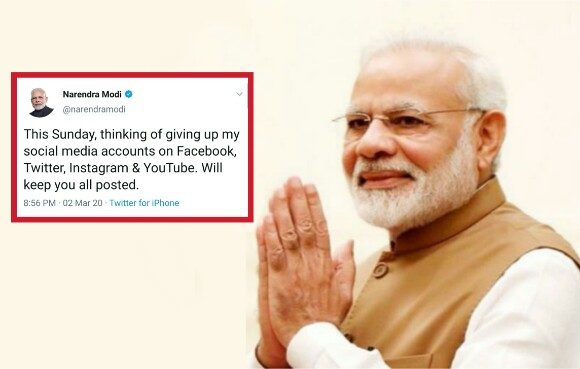 Ever since Narendra Modi became the prime minister of India, he has been aggressively using social media. In fact, he has come forward and also asked people to use social media platforms and connect with others. But, his recent announcement has come as a setback for many.

Well, the news surfaced yesterday even, ie, March 2nd, 2020 when Prime Minister Narendra Modi on his Twitter handle declared that he is thinking about discontinuing his social media accounts on Facebook, Instagram, and Twitter. Here is a look at the tweet of Prime Minister:

When the news flashed on social media and news channels, it came as a wave of shock and surprise for many. Prime Minister Narendra Modi who has more than 50 million followers, he is the third most followed political identity on the social media, Donald Trump with 73 million and Barrack Obama with 113 million followers preceded him.

Soon after he declared his thought of unplugging from social media platforms, a shock wave swept social media. Soon the hashtag #nosir started to trend. Here is how Twitterati reacted to Prime Minister’s tweet:

People Around The World Love You So Much Modi Ji. You May Take A Short Break From Social Media If You Want But, #NoSir We Requesting You Musn’t Leave Social Media. #NarendraModi pic.twitter.com/4u75iYdRhB

People saying #nosir to @narendramodi but I say sir, do it & go on Indian owned Platforms, which are fair & neutral.

Social media is the only way to connect with u sir.@narendramodi sir plz say it is not true😔#NoSir pic.twitter.com/bKcuBN2TJo

Sometimes it’s the smallest decision that can change our life forever ! I will follow the path of my leader !! https://t.co/D7l1iZcosS

Well, some political leaders took a dig at Prime Minister’s decision and said that he should give up on bigger things like hatred rather than social media. This tweet came from Rahul Gandhi; here is a look at what he wrote :

Give up hatred, not social media accounts. pic.twitter.com/HDymHw2VrB

Later this evening, ie, March 3rd, 2020, Prime Minister Narendra Modi unveiled the suspense behind his tweet and said that he would give his social media account to women who inspire us. Here is a look at what the Prime Minister said.

This Women's Day, I will give away my social media accounts to women whose life & work inspire us. This will help them ignite motivation in millions.

Are you such a woman or do you know such inspiring women? Share such stories using #SheInspiresUs. pic.twitter.com/CnuvmFAKEu