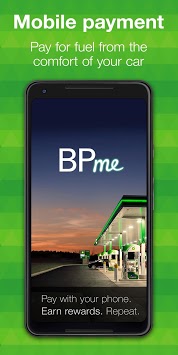 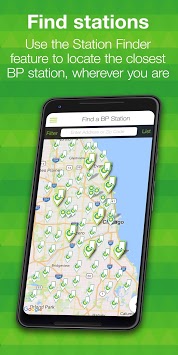 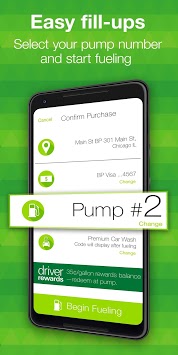 Excellent app. The ability to make payments from my phone, even before I get out of my car, is what hooked me. It's a useful safety feature. All the rewards and extras are fantastic. The app's UI and performance are excellent. It is very user-friendly.

Although it's an excellent concept, the coding needs to be improved. The app has problems paying at the pumps so that I can redeem my rewards. Force closing the app, clearing the cache, and trying to use the rewards multiple times per visit. It works about every 2 or 3 visits. It is a great idea, but I need your help to fix it.

After reading through the terms and cons, I am afraid to use the promo. The terms and conditions mention that the promotion can be ended at any date. If you continue to benefit from the offer after the end of the promotional period, you will still have to pay the amount received. Thanks so much

Worst app ever. It never worked for me. I contacted support and was told to delete the program then reinstall it. It still didn't work. Now I cannot log in. It was great in theory, but it wasn't practical. I deleted the app. They deleted the app, and then I attempted to reinstall the app. It was still the worst. The app keeps crashing and saying "something went wrong. Please try again". It's so annoying that I cannot even log in. It's completely useless.

This is more aggravation that anything! It worked once, I believe. Every other attempt failed or was partially successful. Sometimes stations don't have accurate GPS locations so it won't let you pay if you get too far from a station. Sometimes the app won't even spin, telling you whether to pay at the pump/inside. Although I was able to use the app to purchase gas, it failed to offer the discount. Shell's payment app works much better.

This is the worst application I have ever used. Sign up bonus never received. The app crashes and closes when I attempt to pay. It's not possible to get any rewards. It just takes me to my account page, where I can see that it has subscribed. However, it never attempts to find other nearby gas stations. It would get a negative star if I could.

The most complicated sign up process I've ever seen. Sign up in the app only and then confirm your email. You are being sent back and forth between emails three times. The last time was to create a password using a browser. After all this, I was unable to set up a password. These gas reward apps don't work very well. It's been a frustrating experience. It's not worth it to rely on your cash or card instead.

It works great when it does. It can be frustrating, however, to sit at a station while the app says you aren't there. The app doesn't have an option to search for the closest station, but it is useless if you can't select the one that interests you. The app or stations need to be updated. However, the rewards program that was previously in place should have continued until it is fully functional.

When it works, this app is amazing. I've tried to use the app for payment twice now. Twice, the app hasn't loaded. It just stands on the main screen, and the loading bar keeps moving across the screen incessantly. The app will be deleted if this occurs again. It was supposed to be easier, but it's not.

An unsuccessful attempt to upgrade the rewards program. It is slow enough that I can fill up at the pump without having to pay with my CC. My phone sometimes powers down while I am trying to log in, and then it resets itself. My payment information has also been reset at least three times. It was a pain to link CC. After checking to see if fuel credit was available, I discovered that there is no payment information.

It worked perfectly for me for several months, and it was a great experience! It was so easy and I loved the discounted. It stopped allowing me to log in one day. The app has been uninstalled several times and I have reinstalled it numerous times. I even tried creating 2 more accounts. Now, I have three accounts with BP. None of these can be used. It is very frustrating. It was a great discount card, which I could swipe to get the discounts. That worked perfectly!

It started out badly, but it is improving. The app expected exactly 16 digits, which I didn't have (Visa M/C Discover, Discover), while AMEX only has 15 digits. It also refused to start reliably, so I tried to open the app multiple times. The AMEX issues were fixed and I was able to enter my card. However, the app still wasn't reliable and it took me a second try before it worked. It has been working fine the last time I used it. This method of paying takes longer and is more difficult to verify the number at the pump from the inside.

The previous rewards system was far more appealing to me. It was simple to use the rewards card and it never failed like this app. You could also enter your phone number. The app now works slowly, is hampered by bad cell reception, and only the person who installed it can use it. It's not a significant improvement over the previous method.

Update: BP reached me to address the following issues. The team was helpful, and they were able to resolve one problem. I have increased the rating to four stars. The app should be faster especially in NJ, where it is not allowed to fill our own fuel. ... It worked the first time but has not been working since. It is very slow. I could not get past the payment screen. It was also difficult for gas station attendants to understand. The app was too complicated, which they believe leads to delays and loss of business.

The app has been spinning circles trying to sign me into my rewards account. It's so frustrating. Update: They fixed the problem. The app is great. The app makes it easy to pay with my card and gives me peace of mind. It also keeps my receipts for gas in one place, so they don't get lost.

Now, you will be able to setup and run BPme - Mobile Fuel Payment & BP Driver Rewards app on your Computer via the emulator.