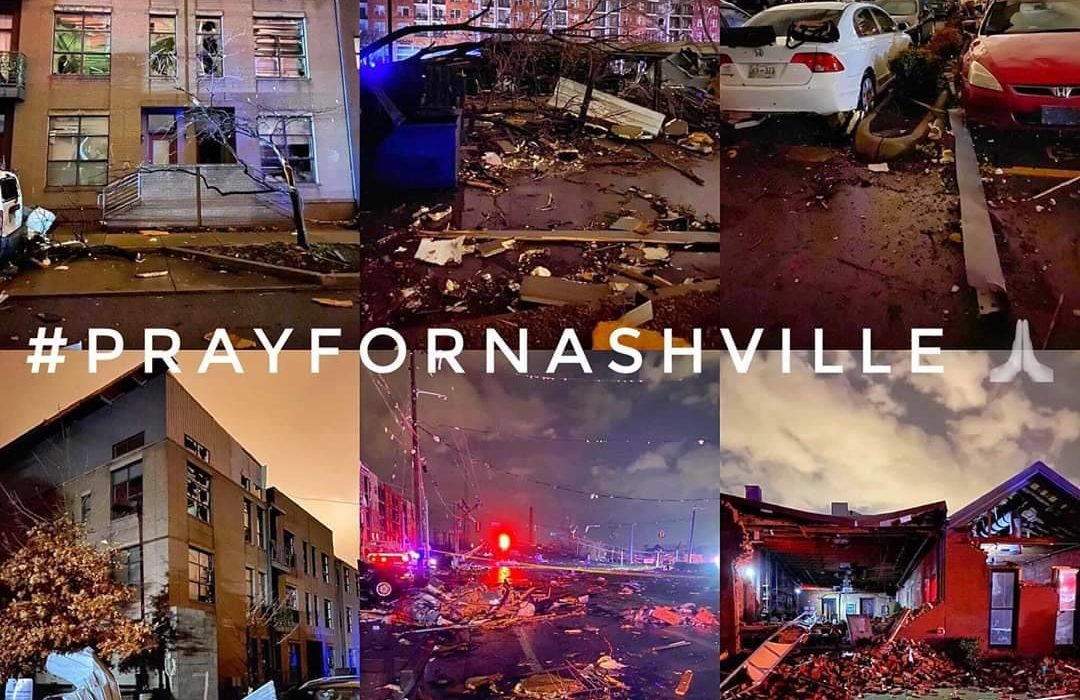 The devastating Tennessee Tornadoes hit Nashville in the early hours of Tuesday, 3rd March. Killing at least 22 people, the tornadoes caused a great deal of damage all across the city and surrounding area. With many still feared missing across the state, collapsed buildings, and damaged properties, authorities have declared a state of emergency.

Many tweets started surfacing since early morning with images and footage from ground zero. Along with the trending topic Nashville, #PrayForNashville also started trending on Twitter.

Nashville Mayor John Cooper held a press conference in light of the tragedy. He quoted ” Last night is a reminder of how fragile life is”.

The scenes at Nashville and surrounding areas in Tennessee is horrifying. People are missing, communications are been shut partially, and there’s no electricity in the region. At least 48 buildings were destroyed last night by the catastrophe.

Disturbing footage from Nashville fill twitter. Including news channels and individuals, a lot of videos were posted on Twitter. These footage show how bad the tornadoes struck Nashville.

In this video by @Breaking911, you can see the devastation caused at John C. Tune Airport, Nashville.

This is the scene at John C. Tune airport in Nashville

Take a look at the following tweet by @Morgan_Evans. Here, you can see in 6 different images how badly the streets and the buildings were impacted. From cars, street lights, bus stops, to buildings, the damage was immense all around.

It was a devastating night for Nashville. Thank you for all the messages we’ve received. Kels and I are ok, but many are not. 💔 pic.twitter.com/nYX77ihTfN

Here is another footage showing destruction spread across miles in central Tennessee. @CBSNews covered these footage and interviewed a couple of affected residents too.

Watch this video showing the extent of damage in Nashville’s Germantown neighborhood.

Some videos capturing a tornado live in action during the early hours of Tuesday also surfaced. In the following video, you can hear a reporter capturing the tornado live as it crossed the Channel 5 area. As you can hear the reporter urging the viewers to move to a safe place. Later on, he continues to report that the TV station was being directly hit by the tornado. He also adds how large the tornado’s base is. Here, was the video.

Here is another video from @Reuters showing the extent of the damage caused.

At least 19 people were killed by a powerful tornado that struck Nashville early Tuesday, flattening buildings, damaging an airport and leaving tens of thousands of people without power https://t.co/QR1BEcgXMR pic.twitter.com/CZiqgGJ7ID

As Nashville goes through this tragedy, millions of people stand in solidarity with the affected. Many locals were left unharmed too and they are doing their best as of now to help the people around.

2 times world champion @RealLoganRyan tweeted praying for the affected. In continuation, he also mentioned how he has set up camps to rescue and help affected families as well as pets. Housing and resources are being provided by Ryan’s Ryan Animal Rescue Foundation.

Praying for Nashville during this tragic time. My family & I (dogs included) are doing fine after the recent tornadoes that hit Nashville. Many other people have not been so fortunate. 🙏 Cont…

The Ryan’s, Ryan Animal Rescue Foundation (RARF), & the animal community have come together to provide resources to help families with pets who have been affected by the storm. 🐶🐱 Cont…

In his tweet, Mayor @JohnCooper4Nash declared a state of emergency and said “We will rebuild. We will be stronger”.

I have signed an executive order declaring a State of Emergency in Metro’s Nashville and Davidson County area. We will rebuild. We will be stronger. pic.twitter.com/IGEtkkQ5RB

People stand with Nashville in their hard times. One of the great examples of helping hands during this time is this Airbnb host offering free housing to those whose house has been damaged by the tornado.

Nashville spread the word. Free housing through Airbnb if your house has been damaged #PrayforNashville pic.twitter.com/x6XEZ0znDq

If you would wish to donate or volunteer and be a part of the helping hands in this time of tragedy, check this tweet out.

Find out where to donate, how to volunteer and where to go if you need a hand after Tuesday morning's storm.https://t.co/HvHRX80W79 pic.twitter.com/w4Zt8qLdcK

as time passes by, people will rise up, buildings will be built again, and Nashville will get back on its feet even stronger. But, the lives that were lost, the loved ones who never came back, will be missed and there will always be a void that would never be filled.

About 10 years ago, Nashville was hit by a big flood. Nashville will stand up as it did then with the help of each other and all of us who stand with them.

The iconic “I Believe In Nashville” murals started popping up after the big flood ten years ago. It’s stood as a symbol of resilience and togetherness. We are heartbroken for our community after last nights tragic tornado, but know that together we will rise up and rebuild again! pic.twitter.com/WlDutCaHhw

Ending this article with the legendary “I Believe in Nashville” mural back from the time of flood devastations. It’s a sign that speaks Nashville will rise up and rebuild.